As the only Croatian journal exclusively dedicated to dance art, Kretanja / Movements has from its very first issue (in 2002) published a corpus of texts that can be used as a kind of basis or introduction into dance theory, and serve as a platform for dance researchers as well as for the audience interested in field of dance.

Besides, we were presenting in every issue a special thematic union, for example: dance and literature, dance and visual arts, dance and philosophy, classical ballet, dance critique, butoh, inclusive dance, etc. We have also published Movements in English language at particular intervals (2006, 2010) as well as one issue in French language (2011). Nevertheless, communication and more dynamic and frequent dialogue with international spectators and readers by means of bilingual issue seems to us as necessity in order to strengthen visibility and readability of the most propulsive realizations of the Croatian dance practice and theory. So we have decided to publish

Kretanja / Movements in Croatian and in English from double issue 23/24 onwards.

Kretanja/Movements Dance Magazine is published twice a year by the Croatian Centre of the International Theatre Institute.

Please see the Croatian page for full list of publications. 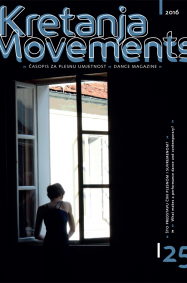