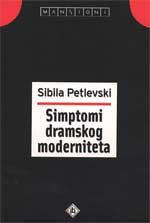 Symptoms of Drama Modernity is a comparative and theatrological study based on an insight into the drama texts of authors of Croatian Literary Modernism (Dečak, Kamov, Kulundžić, Donadini, Kosor, Ogrizović, Milčinović, Krleža). Starting out from the culturological category of Modernism as a concept that covers a specific period characterised by a permeation of diverse media stimuli, the author treats eleven plays from the period. Eight Croatian drama texts, one Austrian, one German and one Slovenian, and a Croatian-Czech-German interfusion serve as typological samples for research into symptoms of the Modern and thereby place them in the context of Central European Modernism. A Chronology is added to contrasting analyses and covers events on the European cultural scene between 1885 and 1917, years defined in critical and historical literature as the boundaries of the Modernism period. Seeking for the symptoms of Modernity in Croatian literature is designated as one step nearer to the typology of Modernism, a very significant period in contemporary Croatian literature.